The efficacy of concomitant chemoradiation in patients with glioblastomas (GBMs) cannot be reliably assessed until several weeks after therapy completion. Our aim was to evaluate dynamic contrast-enhanced magnetic resonance imaging (DCE-MRI) as an early predictive assay for the progression-free-survival.

A total of 22 patients with primary GBMs underwent DCE-MRI before, during and after completion of adjuvant chemoradiation. K trans (transfer constant between the intravascular and extravascular, extracellular space), v e (extracellular, extravascular volume) and IAUGC (initial area under the gadolinium concentration time curve) and their changes into treatment were assessed as prognostic markers (12 months of progression-free-survival (PFS)).

Early perfusion changes during concomitant chemoradiation in GBMs can be detected by means of DCE-MRI and have significant prognostic value for the 12-month PFS. 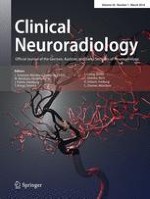 Erratum to: Diagnostics to Look beyond the Normal Appearing Brain Tissue (NABT)? A Neuroimaging Study of Patients with Primary Headache and NABT Using Magnetization Transfer Imaging and Diffusion Magnetic Resonance

Comparisons of MR Findings Between Supratentorial and Infratentorial Gangliogliomas