As an immune evasion mechanism, cytomegaloviruses (CMVs) have evolved proteins that interfere with cell surface trafficking of MHC class-I (MHC-I) molecules to tone down recognition by antiviral CD8 T cells. This interference can affect the trafficking of recently peptide-loaded MHC-I from the endoplasmic reticulum to the cell surface, thus modulating the presentation of viral peptides, as well as the recycling of pre-existing cell surface MHC-I, resulting in reduction of the level of overall MHC-I cell surface expression. Murine cytomegalovirus (mCMV) was paradigmatic in that it led to the discovery of this immune evasion strategy of CMVs. Members of its m02-m16 gene family code for type-I transmembrane glycoproteins, proven or predicted, most of which carry cargo sorting motifs in their cytoplasmic, C-terminal tail. For the m06 gene product m06 (gp48), the cargo has been identified as being MHC-I, which is linked by m06 to cellular adapter proteins AP-1A and AP-3A through the dileucine motif EPLARLL. Both APs are involved in trans-Golgi network (TGN) cargo sorting and, based on transfection studies, their engagement by the dileucine motif was proposed to be absolutely required to prevent MHC-I exposure at the cell surface. Here, we have tested this prediction in an infection system with the herein newly described recombinant virus mCMV-m06AA, in which the dileucine motif is destroyed by replacing EPLARLL with EPLARAA. This mutation has a phenotype in that the transition of m06-MHC-I complexes from early endosomes (EE) to late endosomes (LE)/lysosomes for degradation is blocked. Consistent with the binding of the MHC-I α-chain to the luminal domain of m06, the m06-mediated disposal of MHC-I did not require the β2m chain of mature MHC-I. Unexpectedly, however, disconnecting MHC-I cargo from AP-1A/3A by the motif mutation in m06 had no notable rescuing impact on overall cell surface MHC-I, though it resulted in some improvement of the presentation of viral antigenic peptides by recently peptide-loaded MHC-I. Thus, the current view on the mechanism by which m06 mediates immune evasion needs to be revised. While the cargo sorting motif is critically involved in the disposal of m06-bound MHC-I in the endosomal/lysosomal pathway at the stage of EE to LE transition, this motif-mediated disposal is not the critical step by which m06 causes immune evasion. We rather propose that engagement of AP-1A/3A by the cargo sorting motif in m06 routes the m06-MHC-I complexes into the endosomal pathway and thereby detracts them from the constitutive cell surface transport. 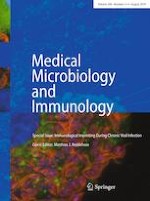 T-cell immunity against cytomegalovirus in HIV infection and aging: relationships with inflammation, immune activation, and frailty