The nucleus accumbens (NAc) is positioned to integrate signals originating from limbic and cortical areas and to modulate reward-related motor output of various goal-directed behaviours. The major target of the NAc GABAergic output neurons is the ventral pallidum (VP). VP is part of the reward circuit and controls the ascending mesolimbic dopamine system, as well as the motor output structures and the brainstem. The excitatory inputs governing this system converge in the NAc from the prefrontal cortex (PFC), ventral hippocampus (vHC), midline and intralaminar thalamus (TH) and basolateral nucleus of the amygdala (BLA). It is unclear which if any of these afferents innervate the medium spiny neurons of the NAc, that project to the VP. To identify the source of glutamatergic afferents that innervate neurons projecting to the VP, a dual-labelling method was used: Phaseolus vulgaris leucoagglutinin for anterograde and EGFP-encoded adenovirus for retrograde tract-tracing. Within the NAc, anterogradely labelled BLA terminals formed asymmetric synapses on dendritic spines that belonged to medium spiny neurons retrogradely labelled from the VP. TH terminals also formed synapses on dendritic spines of NAc neurons projecting to the VP. However, dendrites and dendritic spines retrogradely labelled from VP received no direct synaptic contacts from afferents originating from mPFC and vHC in the present material, despite the large number of fibres labelled by the anterograde tracer injections. These findings represent the first experimental evidence for a selective glutamatergic innervation of NAc neurons projecting to the VP. The glutamatergic inputs of different origin (i.e. mPFC, vHC, BLA, TH) to the NAc might thus convey different types of reward-related information during goal-directed behaviour, and thereby contribute to the complex regulation of nucleus accumbens functions. 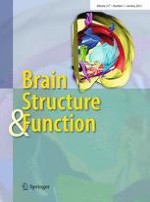 Synaptology of ventral CA1 and subiculum projections to the basomedial nucleus of the amygdala in the mouse: relation to GABAergic interneurons

Quantitative in vivo MRI measurement of cortical development in the fetus