Incisive suture is a suture classically described on the oral face of the palate in fetuses and young children. The aim of our study was to describe the evolution of the incisive suture in human fetuses and to evaluate the incidence of this suture in a population of young children under 4 years, to determine if there is a possibility of improving the anterior growth of the maxilla, by stimulation of this suture.

One hundred and thirty CT scan images of patients aged from birth to 48 months have been studied and nine fetal palates aged from 18 to 26 weeks of development, have been scanned using high-resolution X-ray micro-computed tomography

The CT scan images of patients showed that an incisive suture was present in 33/130 cases (25,4%). All the patients with a suture were under 2 years old. The fetal palate study showed that the suture was present in the inferior aspect of the palate (oral cavity) in all cases. The incisive suture increased from 18 to 24 weeks. At 26 weeks it stopped growing although the intercanine length increased. Considering the closure of the suture in a vertical plane, our study on fetuses has shown that the incisive suture is closing from its superior side (nasal side) to its inferior side.

Considering all these results it appears to us that the incisive suture is partially ossified after birth, it cannot be stimulated by orthodontic appliances. 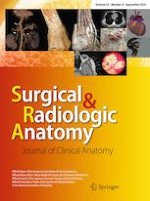 Description and relationships of the parotid gland levels proposed by the European Salivary Gland Society staging system: an anatomical study

Correction to: Three‑dimensional assessment of the sella turcica: comparison between cleft lip and palate patients and skeletal malocclusion classes