Recent studies have shown that the particle size of the shielding material and photon energy has significant effects on the efficiency of radiation-shielding materials. The purpose of the current study was to investigate the shielding properties of the bismuth–silicon (Bi–Si) composite containing varying percentages of micro- and nano-sized Bi particles for low-energy X-rays. Radiation composite shields composed of nano- and micro-sized Bi particles in Si-based matrix were constructed. The mass attenuation coefficients of the designed shields were experimentally assessed for diagnostic radiology energy range. In addition, the mass attenuation coefficients of the composite were comprehensively investigated using the MCNPX Monte Carlo (MC) code and XCOM. The X-ray attenuation for two different micro-sized Bi composites of radii of 50 µm and 0.50 µm showed enhancement in the range of 37–79% and 5–24%, respectively, for mono-energy photons (60–150 keV). Furthermore, the experimental and MC results indicated that nano-structured composites had higher photon attenuation properties (approximately 11–18%) than those of micro-sized samples for poly-energy X-ray photons. The amount of radiation attenuation for lower energies was more than that of higher energies. Thus, it was found that the shielding properties of composites were considerably strengthened by adding Bi nano-particles for lower energy photons. 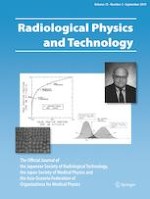