Endosialin/tumor endothelial marker-1 (TEM1) is an attractive theranostic target expressed by the microenvironment of a wide range of tumors, as well as by sarcoma and neuroblastoma cells. We report on the radiolabeling and preclinical evaluation of the scFv78-Fc, a fully human TEM1-targeting antibody fragment cross-reactive with mouse TEM1.

The scFv78-Fc was conjugated with the chelator p-SCN-Bn-CHX-A”-DTPA, followed by labeling with indium-111. The number of chelators per molecule was estimated by mass spectrometry. A conventional saturation assay, extrapolated to infinite antigen concentration, was used to determine the immunoreactive fraction of the radioimmunoconjugate. The radiopharmaceutical biodistribution was assessed in immunodeficient mice grafted with Ewing’s sarcoma RD-ES and neuroblastoma SK-N-AS human TEM1-positive tumors. The full biodistribution studies were preceded by a dose-escalation experiment based on the simultaneous administration of the radiopharmaceutical with increasing amounts of unlabeled scFv78-Fc. Radiation dosimetry extrapolations to human adults were obtained from mouse biodistribution data according to established methodologies and additional assumptions concerning the impact of the tumor antigenic sink in the cross-species translation.

[111In]CHX-DTPA-scFv78-Fc was obtained with a radiochemical purity > 98 % after 1 h incubation at 42 °C and ultrafiltration. It showed good stability in human serum and > 70 % immunoreactive fraction. Biodistribution data acquired in tumor-bearing mice confirmed fast blood clearance and specific tumor targeting in both xenograft models. The radiopharmaceutical off-target uptake was predominantly abdominal. After a theoretical injection of [111In]CHX-DTPA-scFv78-Fc to the reference person, the organs receiving the highest absorbed dose would be the spleen (0.876 mGy/MBq), the liver (0.570 mGy/MBq) and the kidneys (0.298 mGy/MBq). The total body dose and the effective dose would be 0.058 mGy/MBq and 0.116 mSv/MBq, respectively. 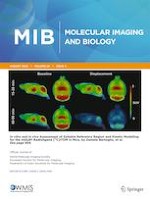 The Acute and Early Effects of Whole-Brain Irradiation on Glial Activation, Brain Metabolism, and Behavior: a Positron Emission Tomography Study