The clinical diagnosis of Alzheimer’s disease (AD) is a probabilistic formulation that may lack accuracy particularly at early stages of the dementing process. Abnormalities in amyloid-beta precursor protein (APP) metabolism and in the level of APP secretases have been demonstrated in platelets, and to a lesser extent in leukocytes, of AD patients, with conflicting results. The aim of the present study was to compare the protein level of the APP secretases A-disintegrin and metalloprotease 10 (ADAM10), Beta-site APP-cleaving enzyme 1 (BACE1), and presenilin-1 (PSEN1) in platelets and leukocytes from 20 non-medicated older adults with AD and 20 healthy elders, and to determine the potential use of these biomarkers to discriminate cases of AD from controls. The protein levels of all APP secretases were significantly higher in platelets compared to leukocytes. We found statistically a significant decrease in ADAM10 (52.5%, p < 0.0001) and PSEN1 (32%, p = 0.02) in platelets from AD patients compared to controls, but not in leukocytes. Combining all three secretases to generate receiver-operating characteristic (ROC) curves, we found a good discriminatory effect (AD vs. controls) when using platelets (the area under the curve—AUC—0.90, sensitivity 88.9%, specificity 66.7%, p = 0.003), but not in leukocytes (AUC 0.65, sensitivity 77.8%, specificity 50.0%, p = 0.2). Our findings indicate that platelets represent a better biological matrix than leukocytes to address the peripheral level of APP secretases. In addition, combining the protein level of ADAM10, BACE1, and PSEN1 in platelets, yielded a good accuracy to discriminate AD from controls. 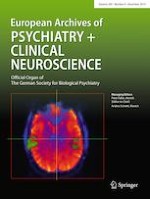 The cognitive, affective motivational and clinical longitudinal determinants of apathy in schizophrenia

Psychiatrists are experts when it comes to missing boats. Will prevention be the next one?

Correction to: Cingulate abnormalities in bipolar disorder relate to gender and outcome: a region-based morphometry study