Comparisons between robotic and laparoscopic right hemicolectomy have been confounded by variations in operative technique. This study evaluates the two procedures after standardizing the intraoperative steps and perioperative management. Patients who underwent robotic right hemicolectomy with intracorporeal bowel anastomosis between July 2015 and June 2017 were matched with a laparoscopic group. Perioperative management was in accordance to an enhanced recovery protocol. Outcomes and histopathological data were compared. Thirty-two patients were included. Amongst the patients who did not undergo complete mesocolic excision, the median operative time did not differ between the two groups (p = 0.413). The robotic group recorded a statistically shorter time for intracorporeal anastomosis (13 vs 19 min, p = 0.024). Postoperative recovery and complication rates were similar, except for a greater lymph node harvest in the robotic group (41 vs 31, p = 0.038). Robotic surgery achieves short-term results comparable to existing conventional laparoscopy, notwithstanding the advantages of enhanced ergonomics. 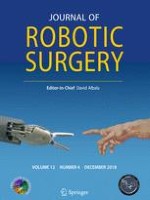 Robotic kidney autotransplantation in a porcine model: a procedure-specific training platform for the simulation of robotic intracorporeal vascular anastomosis

Use of electromagnetic navigational bronchoscopy in robotic pulmonary resection