Functional neuroimaging studies suggest that the insular cortex—and more especially the anterior insula (aI)—is involved in attentional processes and plays a crucial role in the “salience network”. However, its specific role in attentional processing remains unclear, which is partly attributable to the low temporal resolution of non-invasive neuroimaging techniques. This study aims to examine the spatio-temporal dynamics of visual target processing using intracranial EEG recorded directly from the insula. Eight epileptic patients (four women, age 18–44 years) completed a three-stimulus visual oddball task during the extraoperative invasive intracranial EEG (iEEG) monitoring of their drug-resistant seizures. Depth electrodes were implanted in ten insular lobes (5 left and 5 right) and provided a total of 59 recording contacts in the insula. Event-related potentials (ERPs) and high-gamma-band responses (GBRs) were processed offline. Permutation analyses were performed to compare ERP signals across conditions during the P300 (225–400) interval, and modulations of GBRs (70−150 Hz) were computed for separate 100 ms time windows (from 0 to 1000 ms post-stimulus) and compared across conditions using non-parametric Wilcoxon test. Target stimuli were associated with a P300 (250–338 ms) component for 39% of contacts implanted in the aI, most probably reflecting voluntary attentional processing. Amplitude was significantly greater for target than for standard stimuli for all of these contacts, and was greater than for novel stimuli for 72%. In the posterior insula (pI), 16% of contacts showed preferential responses to target stimulus in the P300 interval. Increased GBRs in response to targets were observed in 53% of aI contacts (from ≈ 200 to 300 ms) and in 43% of pI contacts (from ≈ 400 to 500 ms). This study is the first to characterize the spatio-temporal dynamics of visual target processing in the insula using iEEG. Results suggest that visual targets elicit a P300 in the aI which corresponds in latency to the P3b component, suggesting that this region is involved in top–down processing of task-relevant information. GBRs to visual targets occur earlier in the aI than in the pI, further characterizing their respective roles in voluntary attentional processing. 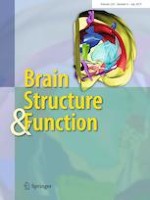