Smoking during pregnancy has long been known as an important risk factor for sudden infant death syndrome (SIDS). However, the precise relationship between the smoking behavior of the mother and SIDS still remains unclear. In this study, the influence of prenatal smoking exposure on the childrens’ DNA methylation state of a CpG island located upstream of the promoter of the growth factor independent 1 (GFI1) gene was analyzed.

Significant hypomethylation was observed in this CpG island in SIDS cases with cigarette smoke exposure compared to non-exposed cases. The strongest effect in this CpG island was observed for 49 CpG sites located within a transcription factor binding site. Coding for a transcriptional repressor, GFI1 plays an important role in various developmental processes. Alterations in the GFI1 expression might be linked to various conditions that are known to be associated with SIDS, such as dysregulated hematopoiesis and excessive inflammatory response.

Data obtained in this study show that analysis of methylation states in cases of sudden infant death syndrome might provide a further important piece of knowledge toward understanding SIDS, and should be investigated in further studies. 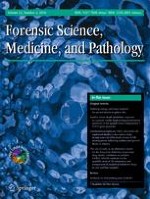 Variations in the anatomy of the vertebral artery cervical loop segment - a potential predisposing factor for traumatic basal subarachnoid hemorrhage?

Response to “Demirjian’s method is unsuitable for dental age estimation”

The forensic implications of predatory publishing