Attention-deficit/hyperactivity disorder (ADHD) is a frequent mental disorder with childhood onset and high persistence into adulthood. There is much evidence that ADHD increases the risk for the development of other psychiatric disorders and functional problems in several domains of everyday life. In this study, the association of ADHD with gambling disorder (GD) was investigated. 163 adult subjects suffering from GD were examined for childhood and current ADHD according to DSM-5 as well as co-morbid psychiatric disorders. Moreover, characteristics of gambling behavior have been evaluated. The prevalence of lifetime ADHD was 28.8 %, with 25.2 % of the study population presenting ADHD as a full syndrome according to DSM-5. The prevalence of co-morbid substance use disorders and adjustment disorders and cluster B personality disorders was higher in GD patients with current ADHD than in the group without. Also, an increased rate of suicide attempts was detected in gamblers with ADHD. In contrast with gamblers without ADHD, those with ADHD were reported to spend more time with gambling, a sedative effect of gambling and a faster development of GD. The high prevalence of ADHD in patients with GD indicates that childhood ADHD is a risk factor for the development of GD in later life. Moreover, treatment of patients with GD and ADHD is complicated by a high rate of co-morbid disorders. Regarding therapeutic approaches, it should be considered that functional aspects of gambling differ in GD patients with and without ADHD. 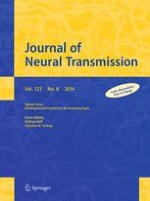 Only complementary voices tell the truth: a reevaluation of validity in multi-informant approaches of child and adolescent clinical assessments

SNARE complex in developmental psychiatry: neurotransmitter exocytosis and beyond