Hub-and-spoke stroke network in the Veneto region: a retrospective study investigating the effectiveness of the stroke pathway and trends over time | springermedizin.de Skip to main content
TOOLBAR 1 2 3 4
SUCHE MENÜ 1 2 3 4

After recognizing the pivotal role played by stroke unit (SU) admission in reducing mortality and dependency in stroke patients, the need to organize and monitor stroke networks has become an increasingly essential aspect of stroke care. We conducted a retrospective study of stroke patients admitted to hospitals in the Veneto region from 2007 to 2015 in order to evaluate the effectiveness of the stroke pathway and trends over time. Between 2007 and 2015, 61,062 stroke patients were discharged from Veneto hospitals: they were more frequently female, females were older than males, and had higher intrahospital mortality and a lower probability of undergoing systemic thrombolysis. Patients admitted to facilities with a level 2 SU were twice as likely to undergo thrombolytic treatment compared to those admitted to facilities with a level 1 and had a lower intrahospital mortality rate. During the collection period, thrombolytic treatments increased in both level 1 and 2 SUs, as did the number of patients admitted to neurology wards and to facilities with an SU. Our study confirmed that thrombolytic treatment and admission to a facility with an SU are important determinants in improving stroke patient outcome. The increase in the proportion of both SU admissions and thrombolytic treatments demonstrates the effectiveness of the regional hub-and-spoke organization model, suggesting that implementation of highly specialized facilities is an efficient strategy in improving stroke care. The role of the observed sex bias in stroke treatment and outcome needs to be explored. 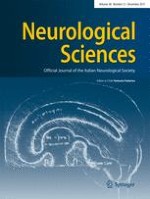 Kubrick’s The Shining and the erased myopathic face