Aging is associated with a deregulation of biological systems that lead to an increase in oxidative stress, inflammation, and apoptosis, among other effects. Xanthohumol is the main preylated chalcone present in hops (Humulus lupulus L.) whose antioxidant, anti-inflammatory and chemopreventive properties have been shown in recent years. In the present study, the possible protective effects of xanthohumol on liver alterations associated with aging were evaluated.

A significant increase in mRNA and protein levels of oxidative stress, pro-inflammatory and proliferative markers, as well as pro-apoptotic parameters was shown in old non-treated SAMP8 mice compared to the young SAMP8 group and SAMR1 mice. In general, age-related oxidative stress, inflammation and apoptosis were significantly decreased (p < 0.05) after XN treatment. In most cases, this effect was dose-dependent.

XN was shown to modulate inflammation, apoptosis, and oxidative stress in aged livers, exerting a protective effect in hepatic alterations. 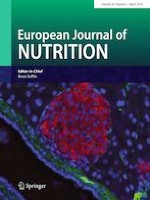 The effect of resistant dextrin as a prebiotic on metabolic parameters and androgen level in women with polycystic ovarian syndrome: a randomized, triple-blind, controlled, clinical trial

Pro-atherogenic and pro-oxidant crosstalk between adipocytes and macrophages